"Yokaren" is the Japanese abbreviation for "Naval Aviator Preparatory Course Trainee" and can also mean the institution itself. In 1930, as the demand for aircraft increased worldwide after WWI, the imperial Japanese navy, who wanted to keep up with the European world powers, started the flight training for young men in order to bring up many flight crew experts by giving basic training at younger age.

Boys who were between fourteen and a half and seventeen years old were selected across the nation by examination and they were given basic training as flight crews. During those 15 years, since the program started until the end of the WWII, 240,000 boys were enlisted and 24,000 boys of them finished the curriculum as combat pilots and went to the front.

The purpose of the Yokaren Peace Memorial Museum 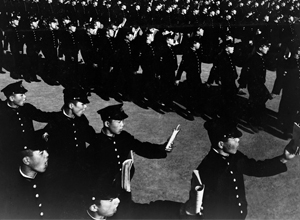 Ami-machi played the central role of Yokaren education and had a long history as a Navy town. It has gone through a special period in our modern history and has many unforgettable incidents inscribed in its culture and history when you think about the war and peace that Japan experienced.

With this historic background, we built this museum to store and exhibit Yokaren’s valuable documents and the historical records that we should preserve for the next generation and delete to give people an opportunity to think about the preciousness of life and the importance of peace. 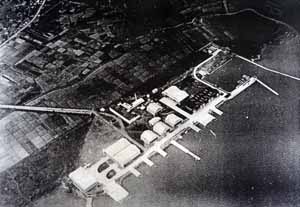 After the Meiji restoration in 1868, Japan aggrandized and modernized the military and promoted market gain through overseas trading. During that period, Japan participated in the Sino-Japanese War, the Russo-Japanese War and WWI.

After the Russo-Japanese War, realizing the needs of aircraft in order to modernize the military, Japan started flight training after they built the Aerial Navigation Research Center in Oppama, Yokosuka. In 1916, Yokosuka Navy Air Corps, the first Navy Air Corps, was born.

There were many Naval facilities around Kasumigaura.

Area around the Navy Air Corps 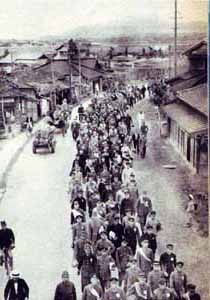 Due to the establishment of the Kasumigaura Navy Air Corp the Ami Post Office opened in 1921 and telephone/telegraph was also installed.

There were developments in transportation as well. In 1920, bus service between Tsuchiura and Edosaki started, and in 1922 a new road was built from Tsuchiura Station to Kasumigaura Navy Air Corps.

In 1923, Jonan Denki Railway opened connecting Tsuchiura and Ami. The population of Ami village rapidly increased as soldiers, builders building facilities and merchants moved in, and a new city called Shin-machi (1927) was created in the city center of Aoyado.

Shin-machi was just fields then, but it became a shopping and restaurant area for the soldiers and their families.( Places such as bars, inns, public path houses, liquor shops, fish shops, watchmakers, barbers, grocery shops, bicycle shops, hospitals, brothels and a police station.)